I had set up my camera for a panoramic shot of Pont Bir-Hakeim, just south of the Eiffel Tower. The clouds were fantastic, heavy with rain, but I wanted that perfect burst of sunshine to light up the bridge against their stormy backdrop. I waited — and waited and waited. Instead of the sun breaking through clouds, there was a downpour. Soaked, hungry, lonely, I frantically packed up my gear, my disappointment and frustration as dark as the rainclouds.

Then came the rainbow. 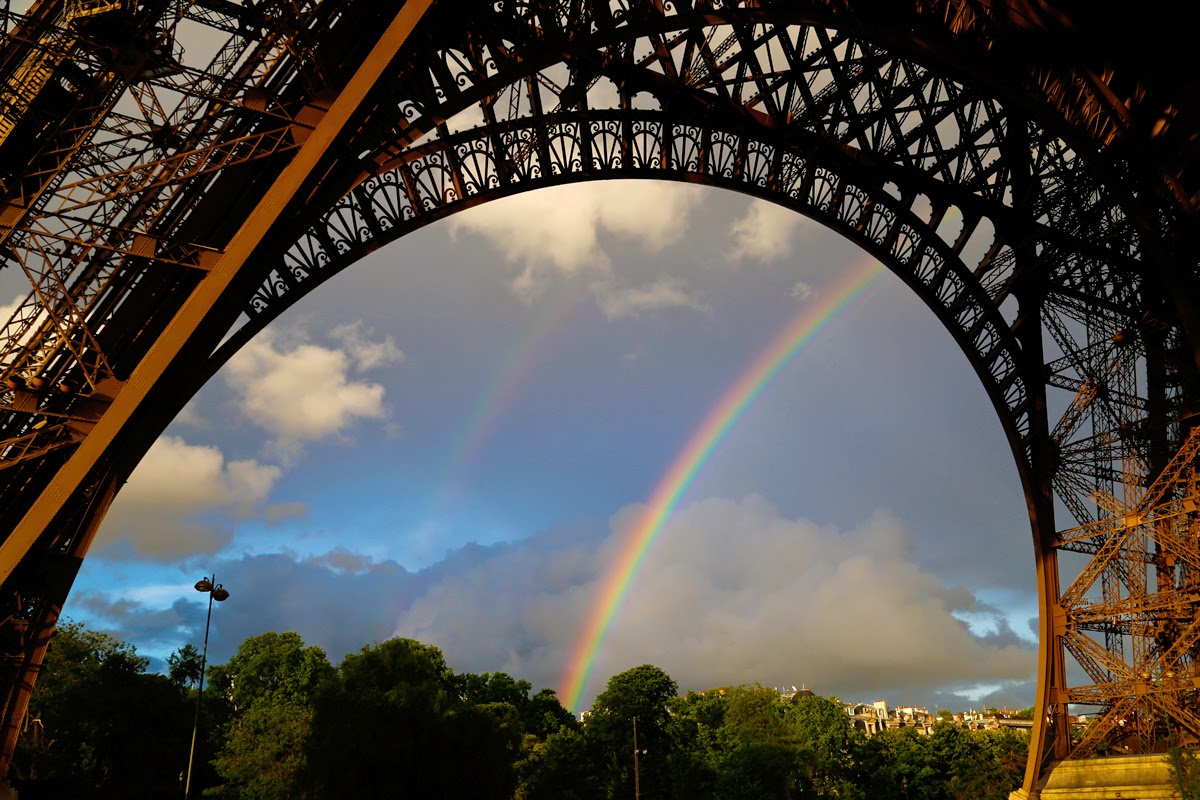 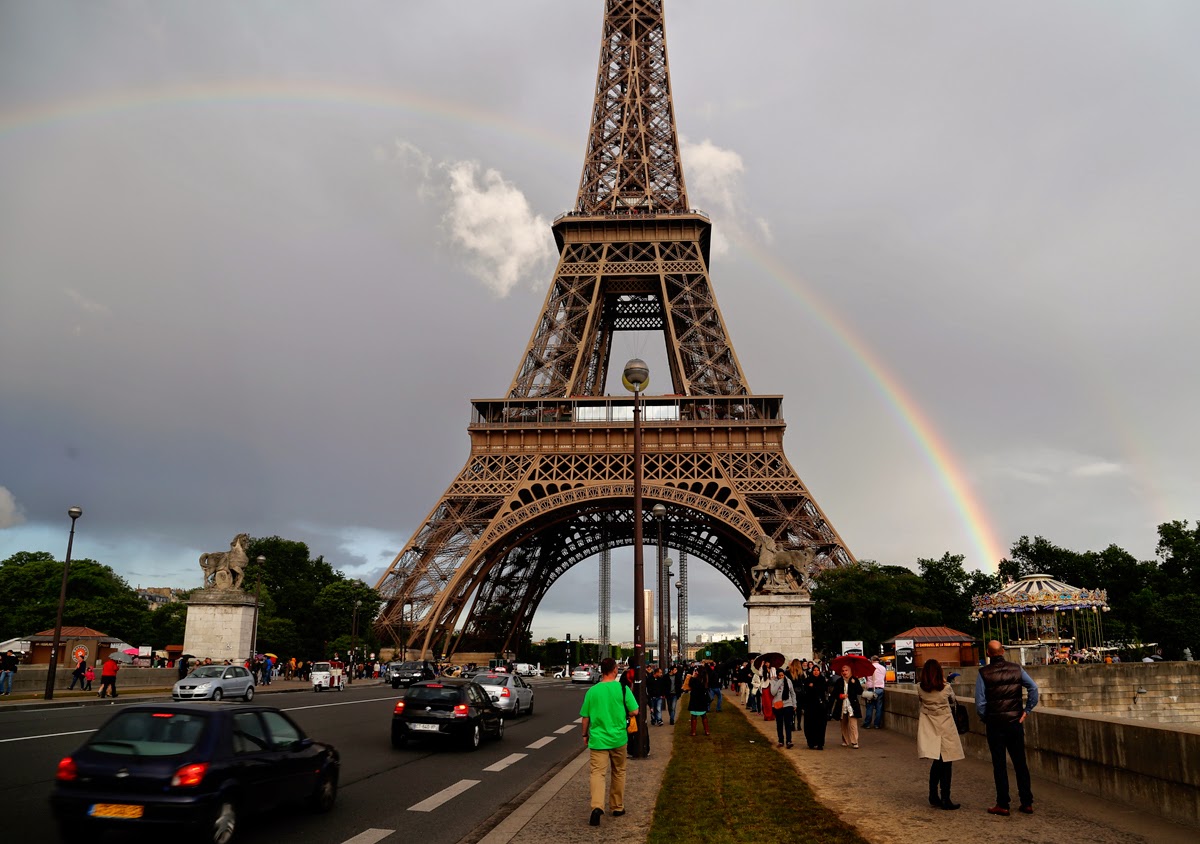 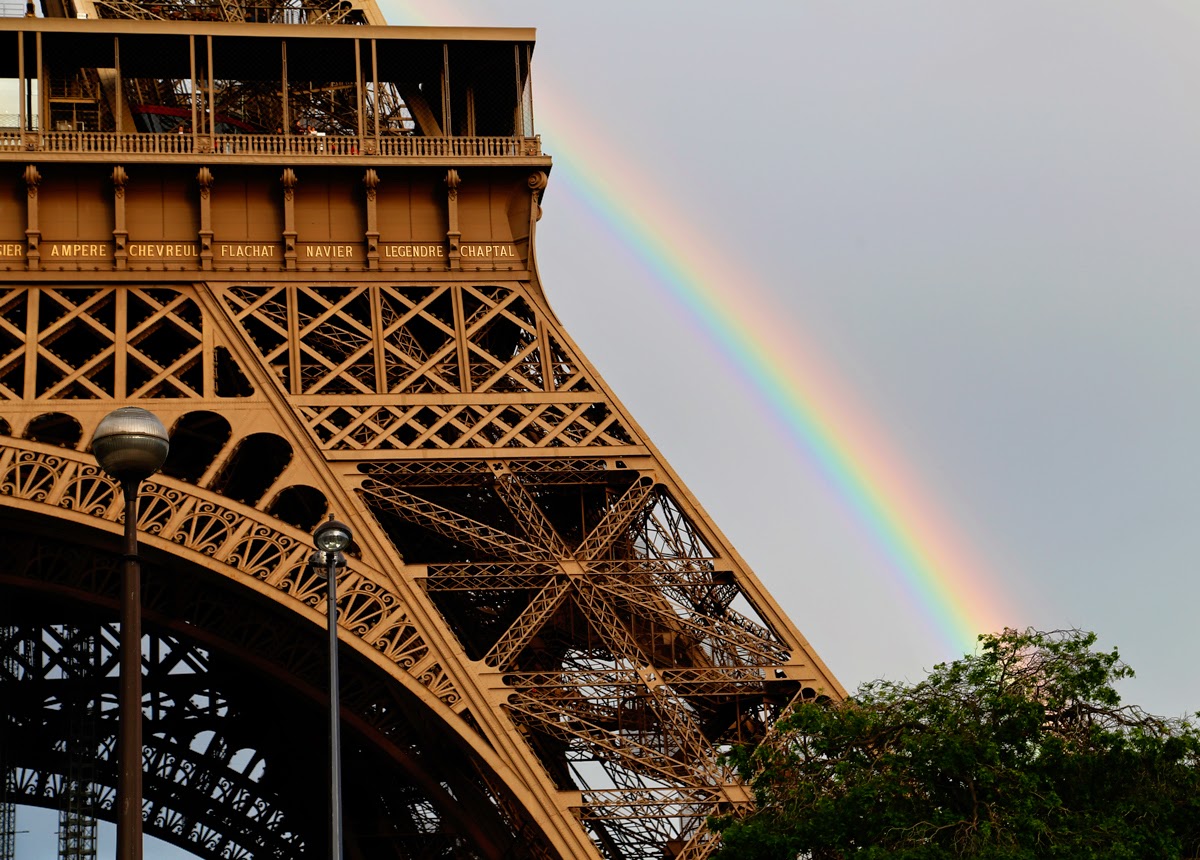 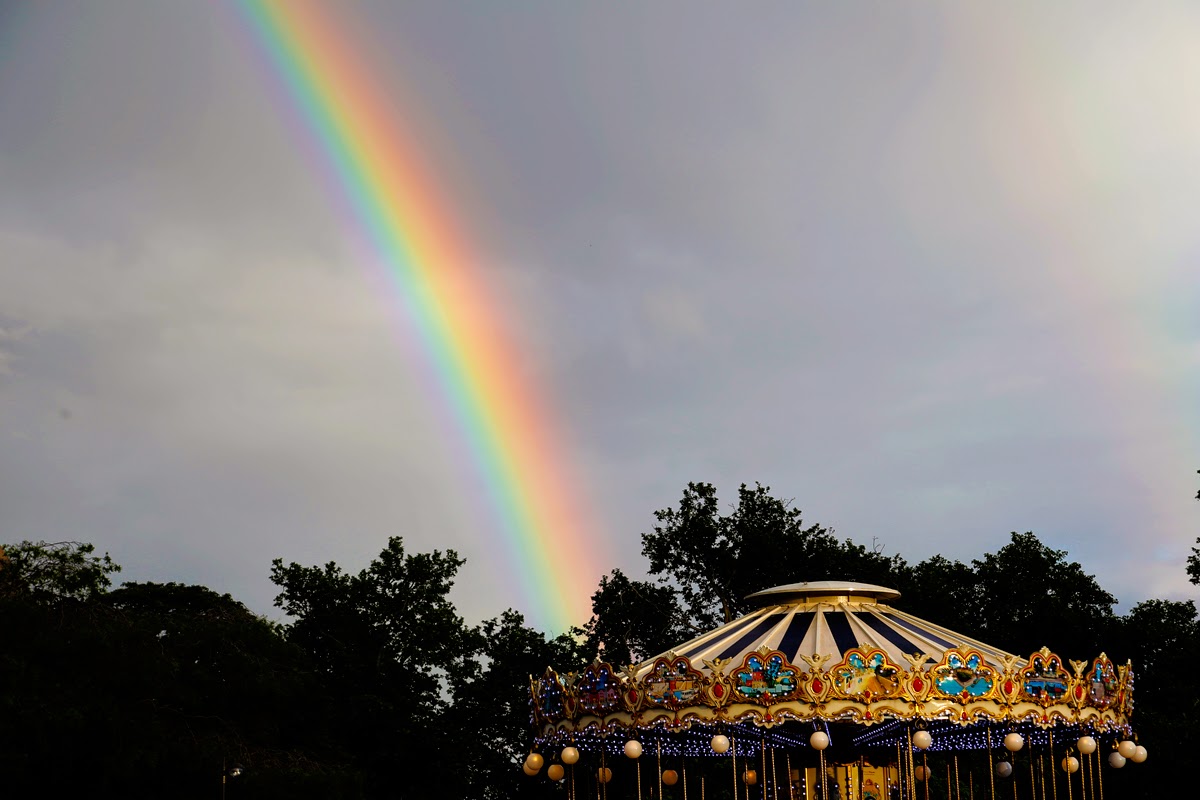 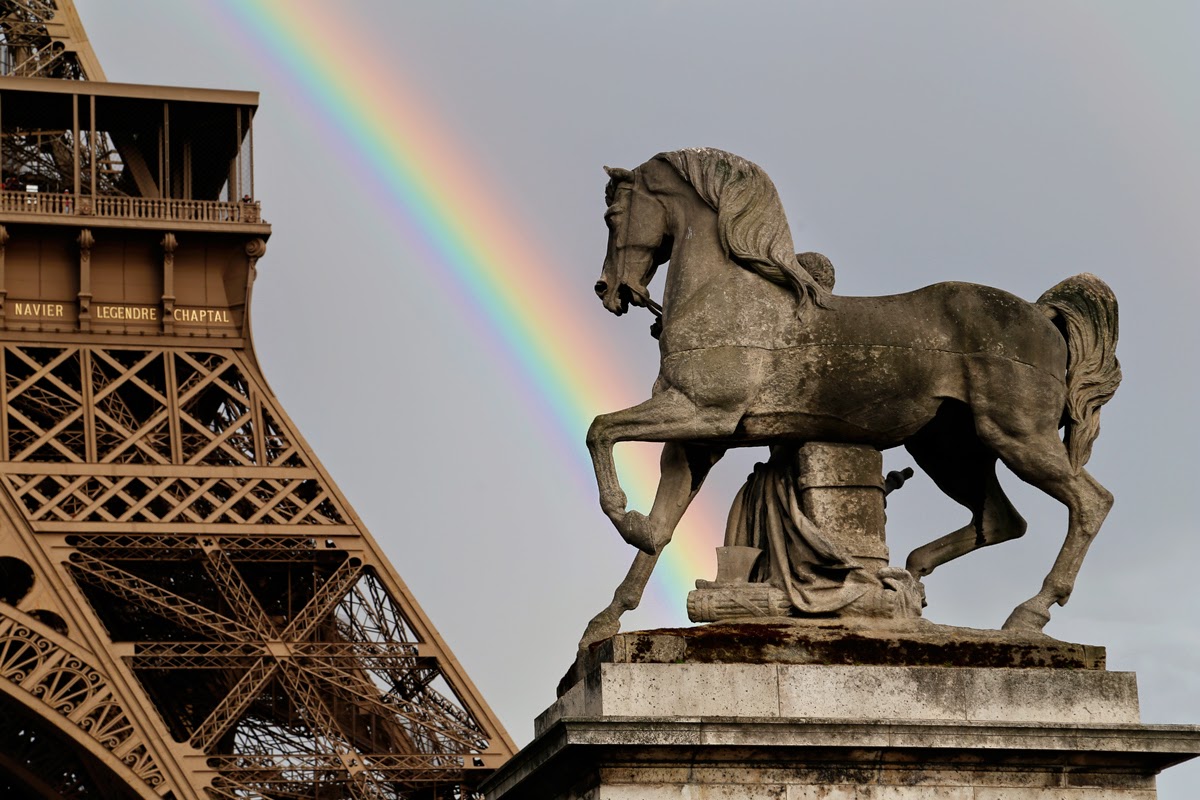 When dark clouds cast their shadows, I just wait patiently for the bow.

Was the historic Sainte-Chappelle in Paris really named after a baseball team? 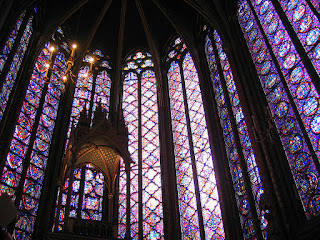 This May, I am one of the hosts on a French Impressionists riverboat cruise and tour of Paris which includes a special concert in the Sainte-Chappelle. This is a note for my guests:


In May we will be visiting the famed Sainte-Chappelle in the historical heart of Paris. At the same time America’s baseball season will be in full swing with everyone’s eye on last year’s surprise World Series champions, the St. Louis Cardinals.

So why will you be thinking about a little red North-American song bird as you gawk at 764-year old stain-glass windows? Why will you be humming Take Me Out to the Ballgame while the chapel orchestra plays La Marseillaise?

Because there really was a Saint Louis.

He was France’s king, Louis IX. Since its confusing with so many French kings named Louis, remember this guy as the one with nine innings of baseball in his name and you will never forget. In French the "s" at the end of a word is silent so pronounce it "lu-ee" like the French and American Southerners do.

After his death the Church canonized him, the only French monarch to become a saint. He was a very pious ruler, known to wear a “hair shirt” by day  (so uncomfortable it made one pray constantly!) and perform fifty genuflections along with fifty “Ave Marias” before going to bed.

He was the guy who installed the Inquisition in France and embarked on the Seventh Crusade. One historian called him, “…one of the great neurotics of history.”

While on that crusade of killing in the name of divinity, he made the most fantastic purchase, the “Crown of Thorns” worn by Jesus. The Emperor of Constantinople (now Istanbul) saw the religious sucker coming and sold the “priceless relic” to him for a ridiculously high price!

So to house and protect this unique purchase, and prove to others that France was at the forefront of Christianity, Louis IX built the Sainte Chappelle. It was completed in 1248 and to the amazement of every historian, still survives completely intact today!

Back in the 1776 era, the United States became a free republic in part because of the tremendous financial support of the French. By recognizing that Louis is the name of many French monarchs, we know something of the entomology of American names like Louisiana, Louisville and St. Louis. Also worthy of note, New Orleans is named after the French Dynasty of the Orleans family and Bourbon whiskey gets it name from the Dynasty of the Bourbon family. 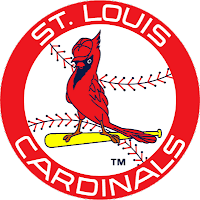 It’s no surprise then that the beautiful songbird got named “cardinal” for the bright red color that matches the robes worn by the highest Catholics priests. And no surprise a sports team in a town called Saint Louis should have a mascot named after a religious rank.

So when you are rooting for last year’s baseball champs, give the same cheer that ol’ pious Louis IX, sitting in his brand new Sainte Chappelle, would have shouted way back in the 13th century: “Go Cardinals!” 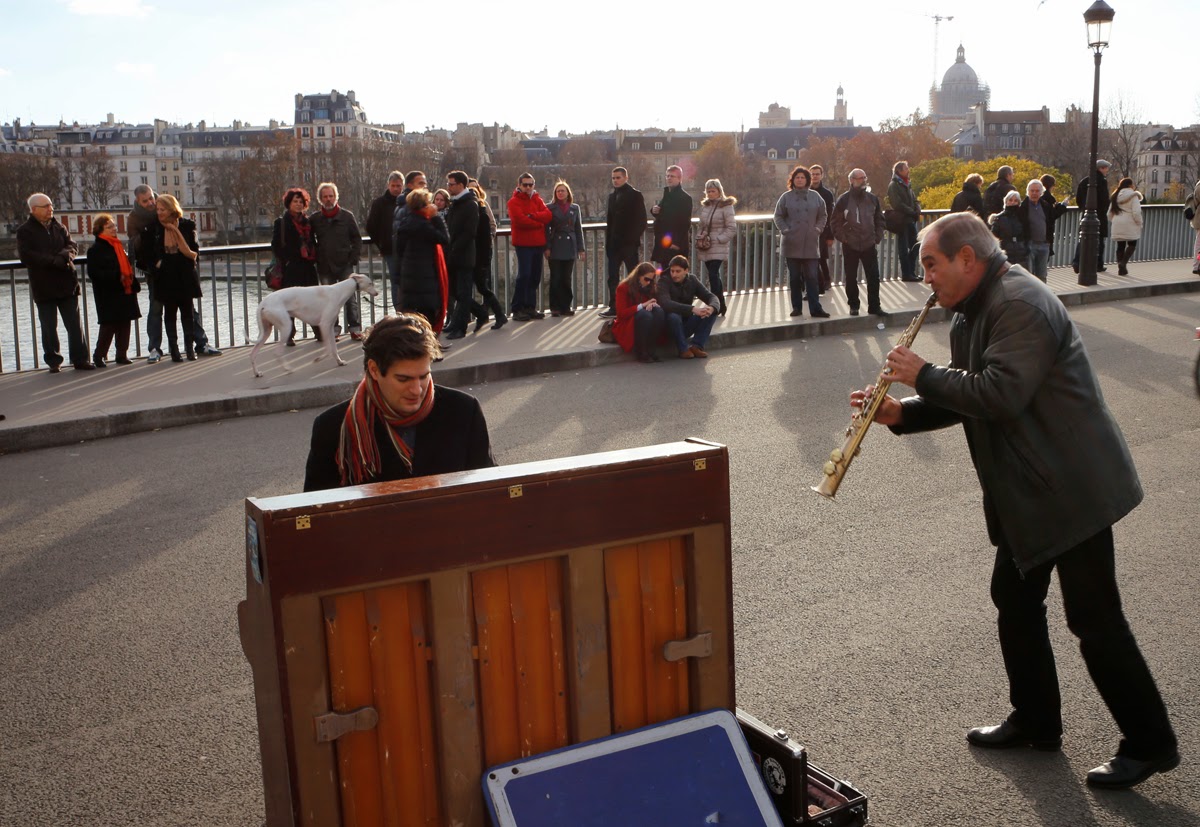 San Francisco has an entertaining cacophony of street musicians and performers, but only the pros play on the streets of Paris. Buskers, or street performers, wandering into the city from foreign parts face exacting standards, and official laws and enforcement of regulations are strict. Because the tourist trade is such big business in Paris, amateurs need not apply. The pros aren’t exempt from the law, but they know how to circumvent it – most of the time. They know where and when to play, and how long they have before the proverbial hook yanks them off-stage.

I love the entrepreneurial aspect of busking. These people work hard to earn their living. I’ve heard many good American musicians lament their missed careers as buskers (a few were assuaging their sorrows, glasses of pinot noir in hand, from the depths of their hot tubs). One understands. How can you compare a hot tub (even if you add in the glass of wine) to the joys of street performance? There’s no contest. On the Paris streets, buskers are living the dream, free and self-directed. Sure, it is a rough life and the rich times are few. But it is an authentic life, as crazy Ernie at le café des Deux Magots on the Place Saint-Germain des Près, proclaims.

Here are three different busking stories, told in pictures. Be prepared for drama. There are villains too. The stories overlap, as the first ends in overthrow, the second in solitude, while the third disintegrates into tragic climax. But don’t despair. Les Pompiers (the Pumpers, or fire-fighters) arrive to save the day. In Paris, they almost always do.

Join me now on Pont Saint-Louis, the busking haven of Paris. Notre Dame Cathedral rises on one side of the bridge, and the élite Ile Saint-Louis, with its serene streets and universe-famous ice cream, la crème glacée, lies on the other.

Jean-Baptiste and Olivier are my favorite bridge musicians. Their show is passionate. Both their CDs sound great, and ya gotta love a guy who brings his own upright piano to a bridge-gig! 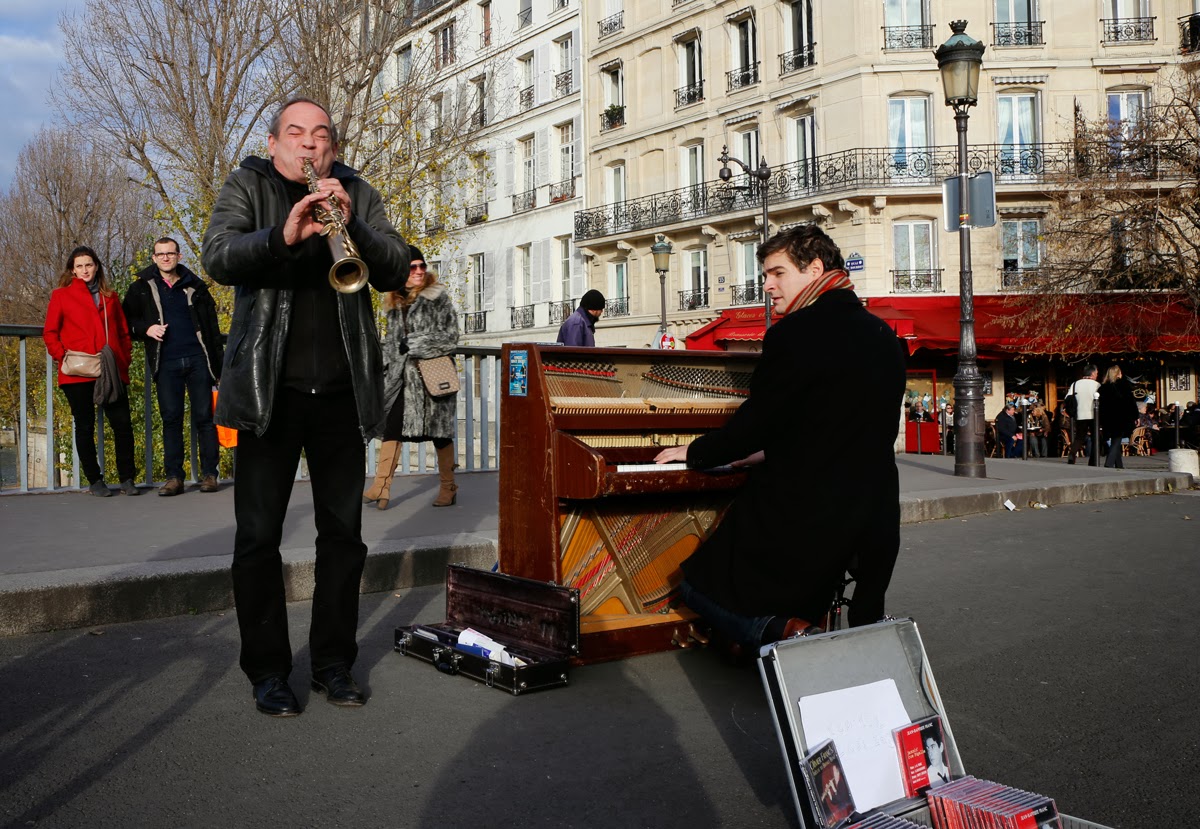 Les flics! Voilà les flics! (which means, “Cheese-it, the cops!). Every story has to have bad guys. Fiction-writing teachers cry, “Conflict, conflict, conflict!” A story where we all got along would be as dull as …. 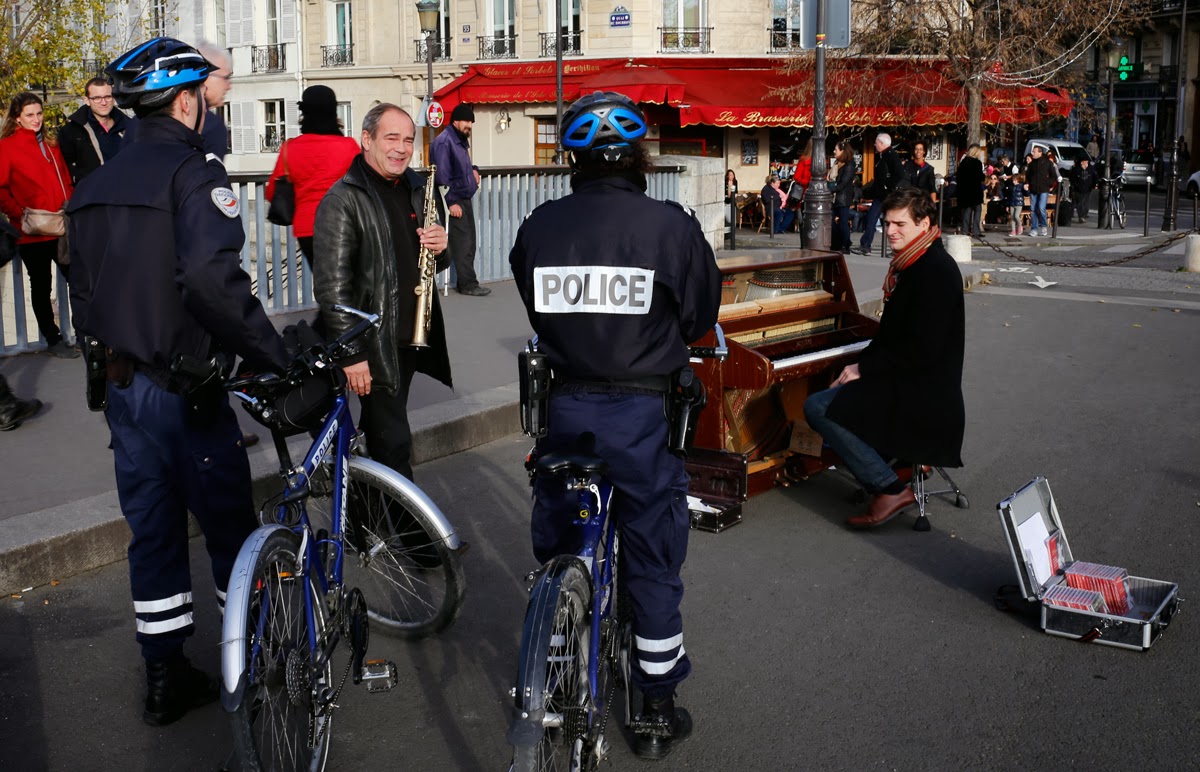 Well, les flics look friendly, but they insist upon the letter of the law.  “Etre artiste de rue, c’est interdit à Paris.”  (It’s illegal to busk in Paris without a permit) 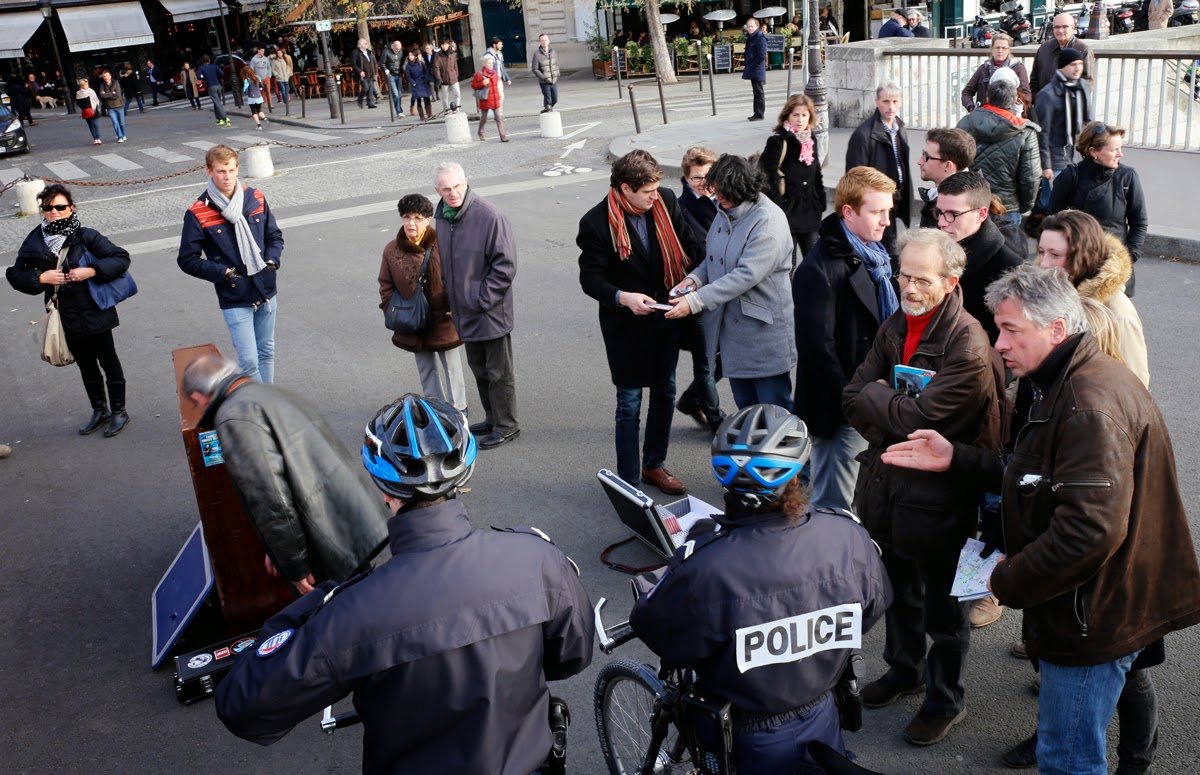 Then the French locals step in to fuel the tense discourse. This is when voices get raised, fists shaken, and things start getting fun. The locals are the true antagonists in our story. The police turn out to be good guys, almost heroes, because they protect tourists like me from crazy locals like these.

Notice Jean-Baptiste doing business selling his music CDs while all this is going on. Police intervention has created a bigger crowd, sympathetic to our main characters. And that is good for business! 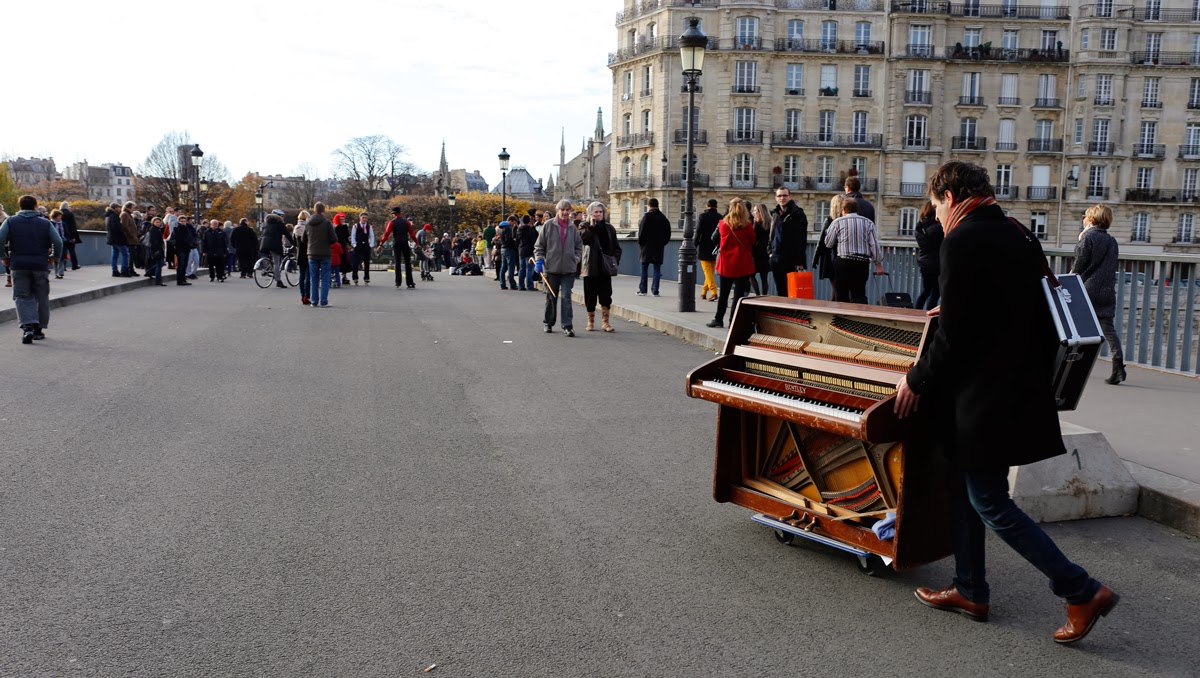 Alas, the story ends with a sad moment for Jean-Baptiste. Here he is, wheeling his piano away from the scene of disaster. But it’s just a lull in the storm. He’ll be back – he is a pro. He knows it, the flics know it, and the locals know it. It’s all part of the game. The key skill of a pro is getting back up every time the world knocks you down. But how in the world is he going to get his piano onto the Metro? 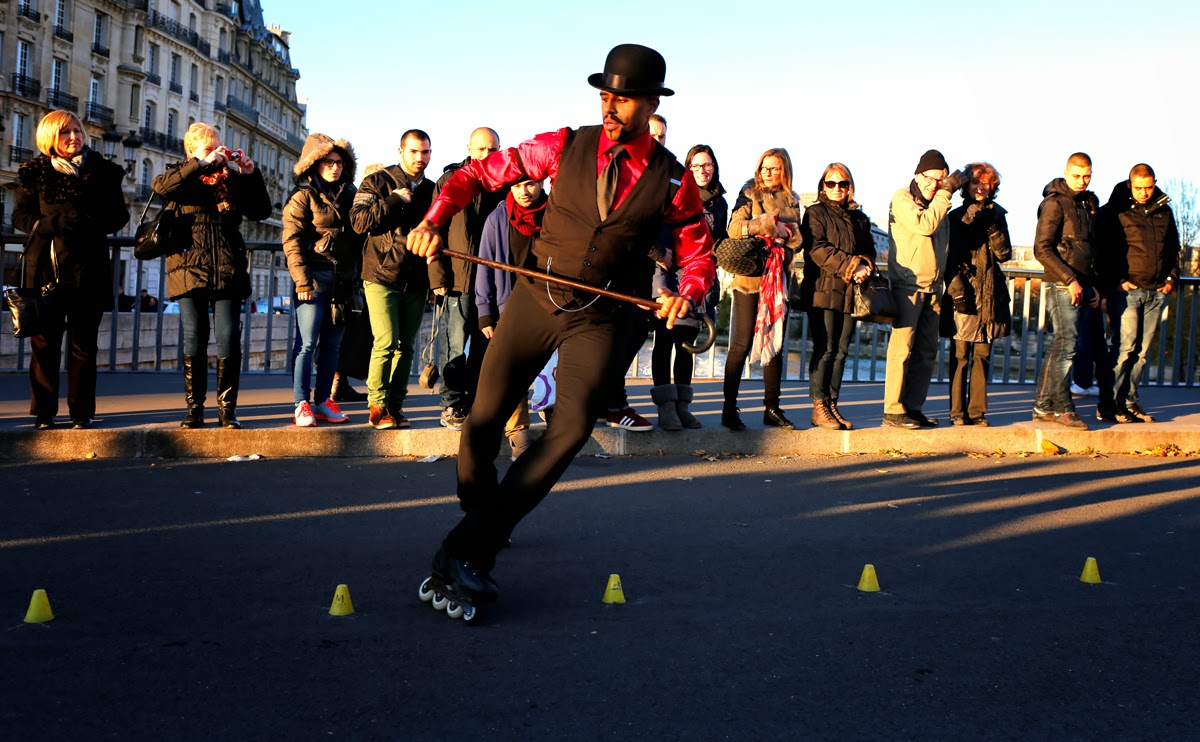 These skating buskers are fantastic. They are the celebrity-stars of our story. Not because of fancy tricks, but rather artful moves and genuine enthusiasm. Imagine standing bedazzled by dancing and jazz music on a bridge over the river Seine in the heart of Paris, on a sunny but cold day, laced with long shadows… Yeah, it feels good.

Every good French story has a femme-fatale. Here is ours: 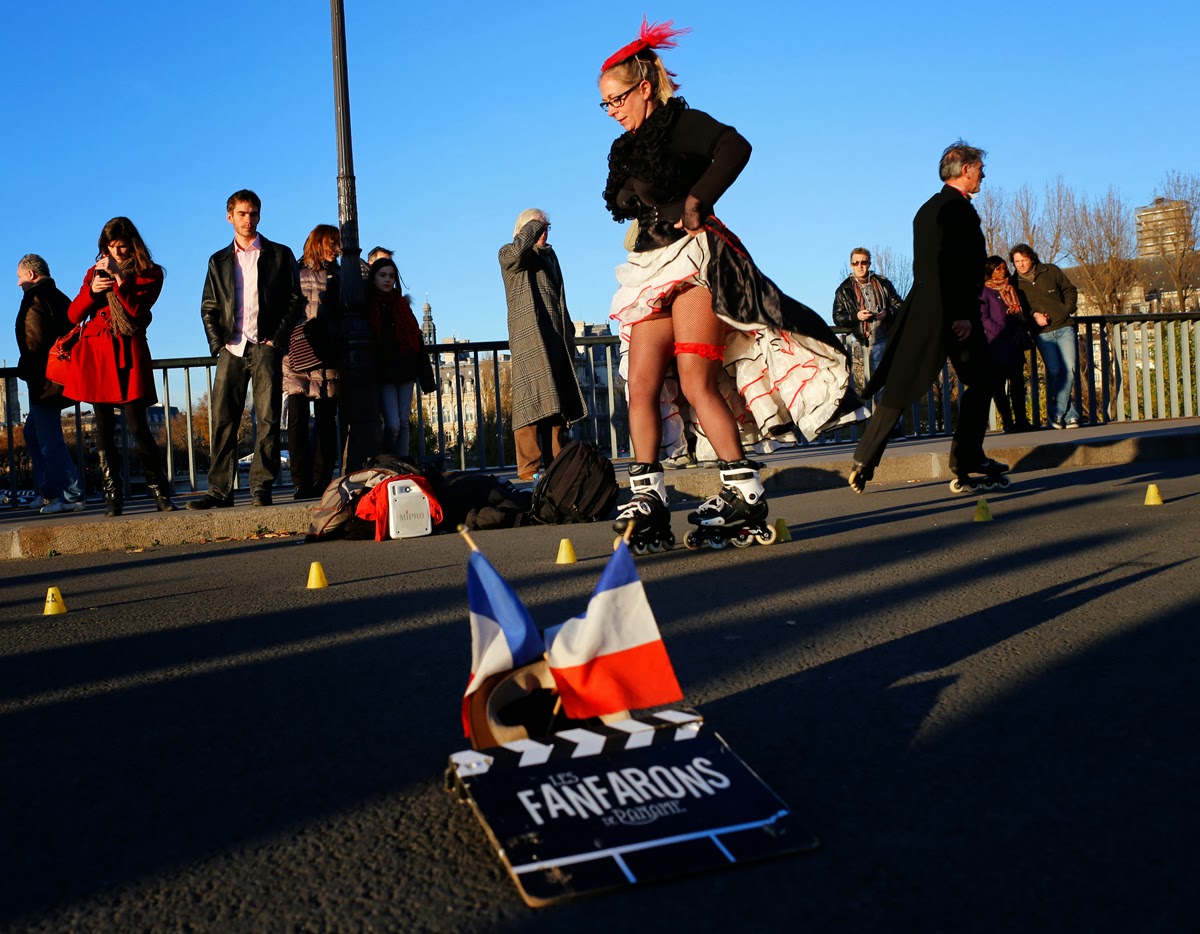 Inline-skates and red garter belt are surprisingly seductive! How do French women do it? They know how to blend masculine and feminine, power and delicacy, perfectly. Here is a woman who will get to work on time under her own speed and look lovely during the entire commute!

Now you get the essential picture:

And did you notice the couple? Here is the hidden heart of conflict in our story. A thousand words could be written about this picture – and you’d still be left wondering.

In my story, “she” is reading the text message “he” just sent:

“Hey, babe, look around! We’re in Paris! Stop checking your #@^$&%* messages or I am skating away with Red Garter and just playin’ my guitar on the streets ….”

Wait, though, before you write your own ending. There’s more to come.

My ending is about this guy:

He’s got all the skills. He’s got desire. He skates hard and fast with rich intensity.

He's got all the moves. 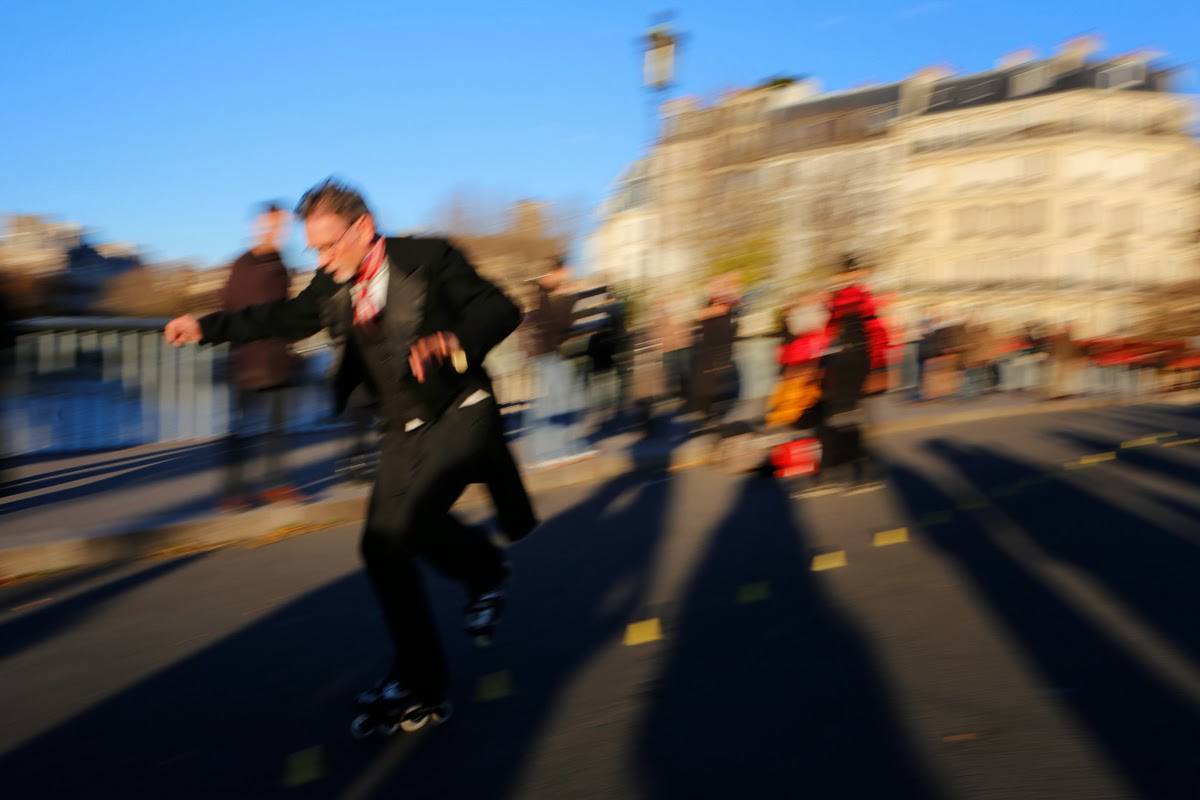 And a need for speed …

Clearly this story must end in tragedy, and since it’s a French story, that’s a good thing. This guy just has to be a tragic hero, and we all know tragic heroes have a fatal flaw. 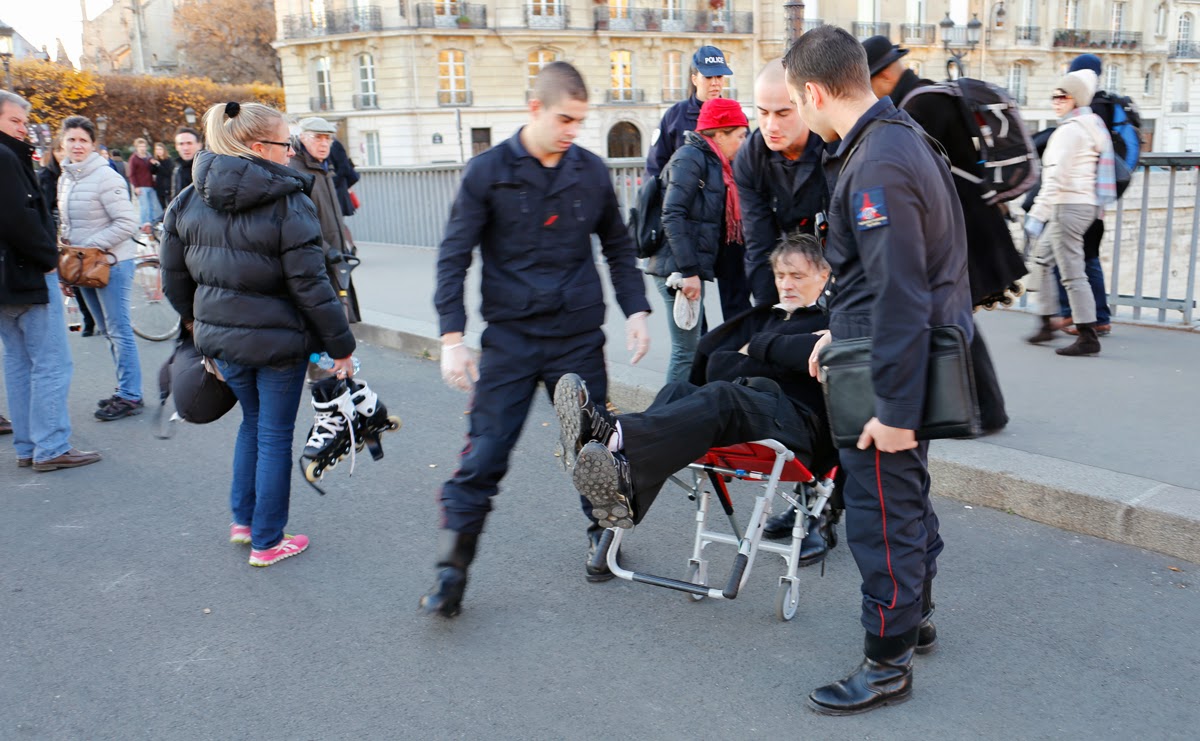 Looks like a broken collarbone, or, as they say in French, une clavicule fracturée.

Everyone in the audience now murmurs, “Eh bien, old bodies and excessive speed never mix well.” His tragic flaw is revealed to all. Oh, the humiliation of it! Someone his age with the hubris to go so fast!

Sadly, they also notice our femme fatale, as she slips away alone, dressed down to just another pretty face in pink shoes. 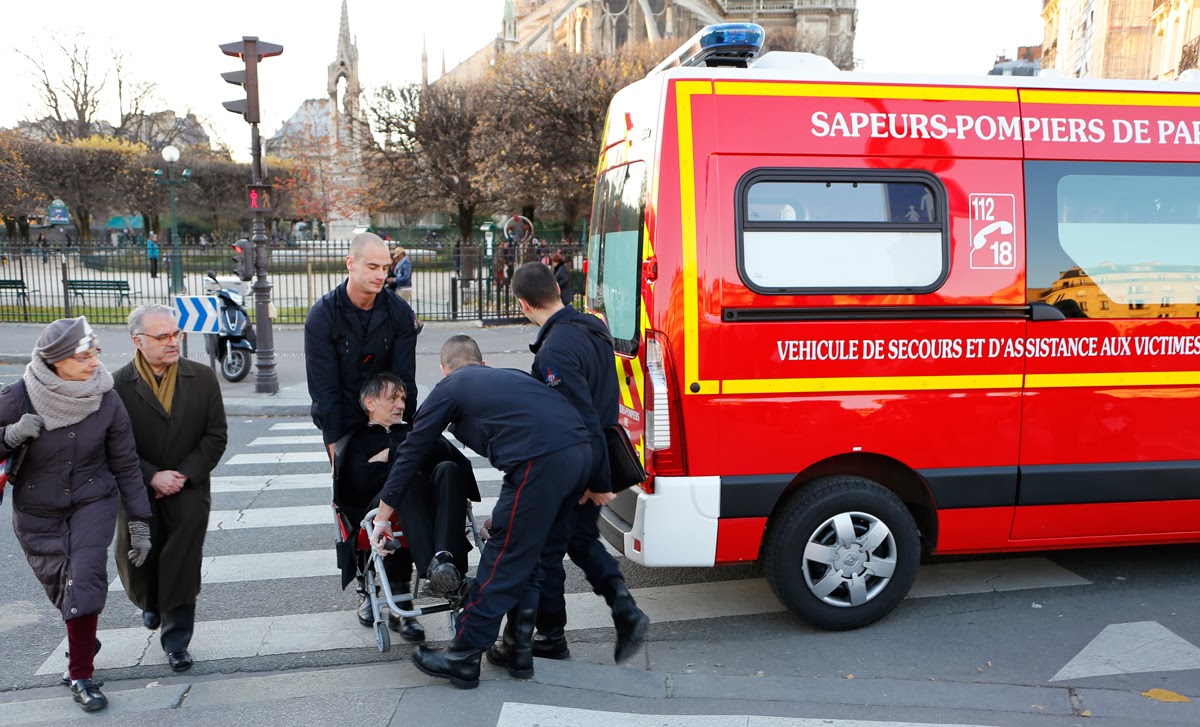 They streak in at the ready, sirens sounding, adrenaline coursing, pumping their arms to lift our poor collar-broken victim into their chariot-d’assistance. 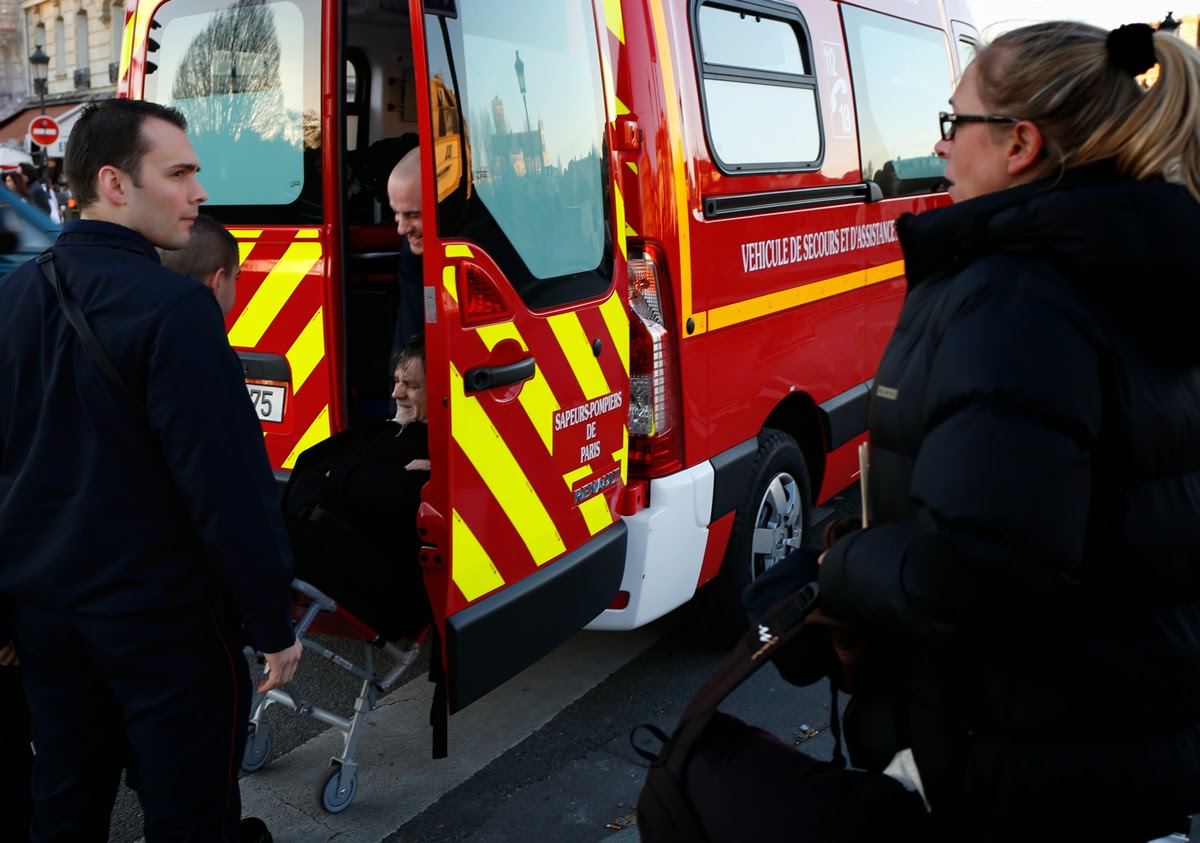 So ends our tale of busking and bad news on Pont Saint-Louis, one of the many heart-stirring  stories from the bridges of Paris. 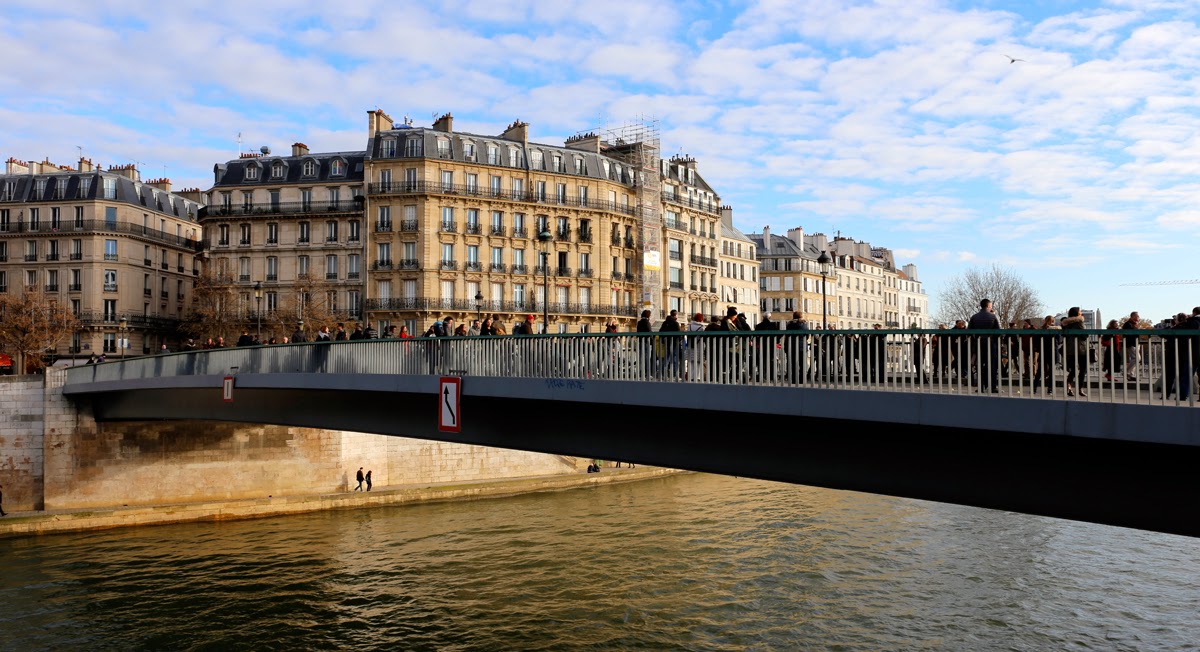 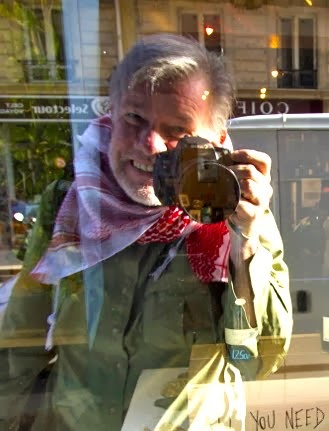 Click here to purchase your copy of the new photography book, Bridges of Paris

Music of the Street

The Louvre Palace from under Pont du Carrousel